Which Cover Do You Prefer?

These two cover proposals came from Dafeenah over at Indie Designz .  She does some seriously fantastic work.  Go take a look!  Her rates are more than reasonable and it has been a pleasure working with her.

Which cover style do you prefer?  Take a look to your right...see that poll?  Cast your vote because, as always, your opinion matters to me.  Leave a comment on the covers if you like.  Like one font and the other image?  Let's get some feedback from the "Happy Few"! 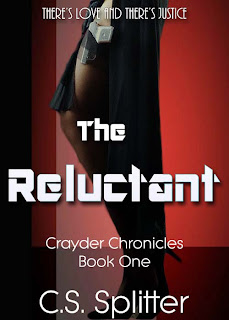 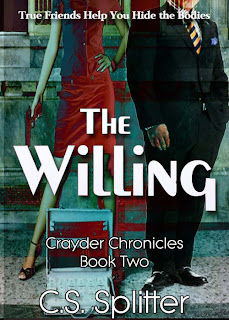 Remember, whichever style is chosen will be the style used for the rest of the series so, please, do leave a comment below.

Tom Crayder's Page and a Gripe

First thing first: Tom Crayder has his own GoodReads group now:  Ask Tom Crayder.
Drop by and talk to Tom about life's problems and get his unique take.
Now, on to the blog post!
“Typographical errors, plot holes, poor punctuation, and terrible grammar, are all sure signs of an independently published book.”
That’s what I read recently (no, they were not referring to any of my work so this is not personal).
Really?  Really??  Have you read any traditionally published books lately?
I’ll admit (never use a contraction outside of dialogue) that I can’t (Help!  I can’t stop!  Oh, no!  I did it again!) read while I write so it’s been a while since I have finished a full length, traditionally published novel.  However, the last few that I read were FULL of all of the mistakes stereotypically attributed to indie books.
I do not know (ok, getting better, I guess) if the economy has forced cuts to the editing staffs at large publishers.  I do know that in the age of computer programs that find errors and with the ability to transmit the latest versions of a manuscript at the speed of light, books SHOULD be coming out with fewer errors.  They are not.  I could give examples of errors by well known authors but shall refrain from doing so here.
Just trust me when I say that errors are rampant even for authors that have entire “Big Six” departments at their disposal.
I don’t (damnit) pretend to write great literature.  I tell good stories (I think) with interesting characters (I hope) and try to not let my writing get in the way of the reader enjoying my stories.  I know that I have annoying tendencies like leaving punctuation outside of quotations, comma dilemmas, and the occasional malapropism (like calling people “expandable” instead of “expendable”).  Most of those get found and fixed thanks to my beta readers and the editorial process.
I also know that I break some rules on purpose, like I have done in this post by over-using parentheses.  I use contractions in first person narratives at times.  I love my ellipses and detest the em dash.  And I will never, ever, stop using two spaces after the full stop period of the previous sentence.  Sometimes, I even use conjunctions to begin sentences…
All of this is to once again say that indie authors need to be judged by the same standards of traditionally published authors.  We know there are a ton of bad indie books out there and we do not like them either.  We, however, do not hold the poor quality of some traditionally published books against ALL traditionally published authors.  We only ask for the same consideration.
In my next post: I should have written vampires and how Jim Butcher almost killed Tom Crayder.
(Please note that while he is one of my favorite authors now, Mr. Butcher has no clue who I am or who Tom Crayder might be so there was no ill intent on his part.)
Splitter
Posted by Splitter's Blog at 2:11 PM 3 comments:

Here is a sneak peek at chapter one of "The Willing."

Chapter One, "The Willing"

We Get By With a Little Help...

...from people who love discovering new authors and talent.  In return, we need to support them.  Here goes:

Ever meet someone who just blows you away with enthusiasm?  You know, one of those people who make YOU tired just watching them.  I have found a few people like that who love to read and love "discovering" new authors and books.  Therefore, today I am highlighting: Indie Supporter .

The site is run by an internet friend of mine mysteriously named JennP.  When I put out my first book, she didn't know me from Adam but offered to review it even though it wasn't a genre she normally loves.  I offered a free copy but she insisted on buying her own.  She said it was because she understood that authors needed to make sales, but I half think she was concerned that she wouldn't like the book.  JennP is...how should I say this?  Honest.  Brutally but courteously in that Texas way.

Not to toot my own horn, but she read the book and became a fan.  She opened up her blog and made it something with a unique flavor in the blogosphere.  I mean, the subtitle to her blog is, "For All Your Literary Crack Needs."  Now I have become a fan of her blog because she does things with tremendous enthusiasm and with a twist all her own.

One of those little "twists" was an interview she did with my main character, Tom Crayder.  She didn't want to interview me, she wanted to interview him.  I understood, Tom is much more interesting than me anyway.  We got tremendous feedback on that interview and it is available still on her blog at Tom's First Interview .

When she says a book is good, I can trust it.  When I finished "The Willing" and wanted to know if it was any good, I sent it to Jenn first.  I knew she would be honest with me even if she couched her critiques in Texas style niceness.

Did she like the book?  Yes.  Did she tell me where it needed tweaking?  Hell yes.  I changed almost everything she commented on because, I realized, she was right.  She was kind enough to be my crash dummmy and now the book is going out to more beta readers for their input and will be published before Thanksgiving.

To you book bloggers, know that those of us that are indies or published by small houses appreciate you!  You are our best marketing instrument AND you make us better with your honest reviews.

So, go support Jenn's book blog and look for more blogs to be highlighted here in the future.

Where Are My Beta Readers?

I have finished my second book in the "Crayder Chronicles" and am looking for beta readers. It would also be good to have one or two new readers who never read the first book so they can tell me if the background info in book two is sufficient.

(not the official blurb below)

How far would you go to protect your friends and family?

Tom Crayder is the All-American guy next door with a business, a wife, a son, a mortgage, and an expensive hobby. He is also a politically incorrect, wisecracking, operative working for a shadowy organization dedicated to administering justice outside of a broken system. No one knows of his other life, including his wife who finds herself unwittingly involved in a drug war.

Strap in with Tom as he navigates his way through the strata of a drug cartel. Lock and load with Lorena, a hard hearted assassin, as she lends her deadly skills to Tom’s fight for his family.

Sit back and watch Tom and Lorena figure out how to work together without killing each other. Join the rest of the cast from

as they pitch in to track down the hitman that threatens their associate.

Some mysteries are solved. Some questions are answered. Some live. Some die.

If you would like to be one of my test subjects, please leave a note here or send me your email address via PM. I will convert the book to MOBI, PDF, or any other format you wish. I will make the book available on Smashwords for free download or I can email you your copy.

Please note, I am not yet looking for reviews, just feedback. However, you can maybe keep your impressions in mind for when I officially publish the book and will NEED reviews.


Splitter
Posted by Splitter's Blog at 11:00 AM No comments:

On Planes and Flying

A lot of my readers send me questions about Tom and his flying.  The main thing they want to know is whether or not the things Tom does with his plane are realistic.  You be the judge (COOL stuff to follow!):

A Cessna C-180 Taking Off in a Pasture (High Altitude Take Off):

OOPS!  Lay off the brakes just a little:

Yes, what Tom does with his plane is realistic.  Hope you enjoyed!